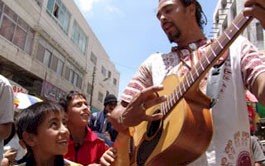 Michael Franti’s journey to the Middle East is recorded in the film I Know I’m Not Alone . His trip to play some music, chat to some people, jam with other musicians and see for himself what’s happenin’ seems like such an ordinary thing for an artist to do. However when it is the war zones of Iraq and the Gaza strip that he is touring to, the normalcy of many of his encounters seem abnormal. Yet in crossing the ocean and the barriers of war it seems that he shows the absurdity and unnecessary nature of war.

He makes it seem so easy, just take the step, reach out to individual human beings–victims of war and agressors– and make peace happen in the world.

I wiewed the film tonight at the Friends Meeting House in Toronto with some people from other peace groups. Members of Christian Peacemaker teams were there also, poignantly mourning the loss of Tom Fox in Iraq. The fact that peacemaking could also be very personally dangerous was very much in the room with the small group of about 30 gathered around the TV monitor. The film was introduced by a woman who had been in Iraq in 2004 with CPT. She struck a note that was harmonious with the film when she said that she never felt more unsafe than at times when she was near people with guns. She gave an example of travelling for a time with a NY Times reporter to report on CPT work there. The NY Times provided armed guards, a convoy of armed vehicles and everyone wore flak jackets. The site of the group travelling provoked hostile reactions and looks from many people as they travelled. Going about Iraq unarmed felt much, much safer.

I left the film wondering if a critical mass of people like Franti really could make a difference by refusing to be frightened of reaching out to those we’ve been told we should fear. I was reminded of other symbolic acts of peace that I had witnessed in my life, some even by people I was privileged to know. I don’t know if it will make a difference but it seems like the only thing that one can do. I hope Franti is right–that he is not alone.

I love the internet when it communicates important messages with style, wit and all the bells and whistles of the medium. This video from Amnesty International entertains, informs and horrifies and has an important message but its send up of tele-shopping is also hilarious! 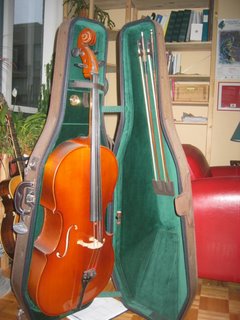 These days to post about my life would be to blog about blogging as I have mainly been filling my idle hours working on the PrashArt blog at http://prashart.blogspot.com

I thought I would join the 43 Things Website http://www.43things.com/ to help motivate me to do more with my life, get more organized. This site allows you to set up to 43 things you want to do, cheer others on with the same goals and give little status reports, send reminder messages.

Not being that ambitious I could only think of 6 things. What an underachiever!

My big accomplishment in the “play my cello” goal was getting the case open.
At that point, the cello, opened for the first time in ages in the dry winter air promptly developed a crack, thereby allowing me to procrastinate for several more months until I get organized to take it in to get fixed. So it wasn’t a total loss.

After awhile I wondered why I hadn’t gotten any of the motivational messages I’d set up for myself. But you see, my computer thought that these messages were spam. So I’d succeeded in spamming myself also.