If you’ve been a victim of the growing problem of false self-employment there IS something you can do.

While legitimate self-employment has some benefits for workers, too many vulnerable Canadian workers are being deprived of access to EI benefits when their jobs end and also deprived of employer contributions to their CPP making affected workers poorer when they retire.

When this happened to me I was very discouraged to find very little information available to help me. When I did find out that I could ask CRA (Canada Revenue Agency) for a determination of employment status, I was still discouraged by reports that this process could take 1 or 2 years before making its way through the bureaucracy.

I was angry. My employer was a non-profit, charitable organization supposedly concerned with social justice yet was treating employees inequitably and additionally ripping off the social safety net of the country. After friendly persuasion and patience got me nowhere, I decided to take action. I had been vocal about the inappropriateness of a staff member being paid as a self-employed contractor for some months without any notice being paid.

When I presented my employer with “Employed or Self-Employed a document from CRA, I succeeded in having my employer contributions started but the employer was still resistent to paying back contributions owing. I followed up by filing the appropriate CRA form to request an employment status ruling. So I am happy to report that my case was settled in a mere one month with the employer required to pay back CPP and EI payments. 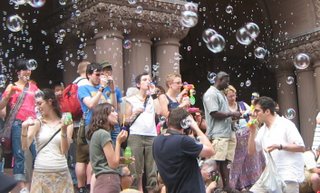 NewMindSpace, self-described purveyors of “cultural interventions and urban bliss dissemination, ” brought their latest playful event to urban spaces in Toronto on the afternoon of July 2 with Bubble Battle, a flash mob of bubble blowers of all ages who filled the air at Queen and Bay with bubbles small, large, round, elongated. . . and mostly plentiful. The bubblers arrived on foot, via Subway and in small bicycle herds, sporting a collection of bubbling gear that was worthy of a Doctor Seuss book. 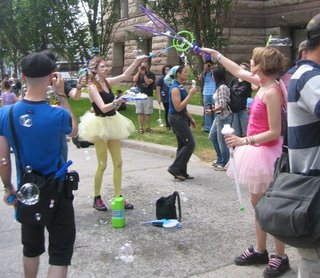 In Toronto these days, Queen Street is the happening place for artists and the alternative culture. It’s a far cry from the staid, upscale galleries and cafes of Yorkville. These artists are alive and creating. They haven’t been stuffed and mounted for display yet.

Bay Street on the other hand is the financial main thoroughfare of the city. A street of grey towers with hardly even a cafe along its downtown expanse to break the gloom.

So perhaps it was fitting that Toronto’s “Bubble Battle” took place at the intersection of Queen and Bay. To mean, it was the only explanation of the word “battle” since certainly no one was battling anyone in the festive crowd that assembled. The bubbles and the mood of the assembled masses were a great antidote to the greyness of the city.