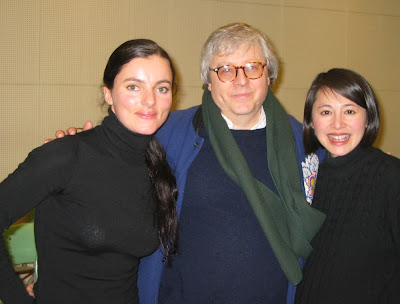 Canadian music has been dealt a serious blow by CBC in their decision to axe the award-winning show Two New Hours, the last broadcast bastion for the live presentation of new Canadian art music. This program was truly world-class, occupying a prestigious place in the international music community and among international classical broadcasters. Knowledgeably moderated by host Larry Lake and produced by Canadian composer, David Jaeger, it was a jewel that has been thoughtlessly cast aside.

Will CBC stop presenting Canadian art music entirely? No, it seems not, but the replacement show, The Signal, in its initial show has broadcast only a small sampling of serious Canadian music from recording. By relying on recordings rather than taping live concerts as Two New Hours did so successfully for 30 years, CBC is presenting the works of composers who have already met with some success, rather than being a launching pad for new voices. It has ceased to be a partner in the creation of a unique Canadian musical voice and canon.

What is happening at CBC? Their corporate communications all cite a need to appeal to a younger demographic and have a larger market share. Surely this is a problem for commercial radio rather than public radio. Is not the mandate of public radio to serve the interests of the development of a national body of art and to serve the interests of minorities within the population–those NOT served by commercial media. Surely there is a plethora of commercial radio stations serving the interests of teens and young professionals with a taste for pop culture. One might say, “serving the lowest common-denominator”.

As an arts administrator I have become familiar with the basic criteria of Canadian national and provincial public funders when it comes to grants for Canadian performing arts. If it is populist it is deemed to not require public support, or require less support–the marketplace will fund it. If it has artistic merit but is unlikely to find an immediate audience–so not commercially viable–it is deemed to need support from the public sector. To give just one example: in 2001 I was serving as interim General Director of Opera Ontario when Canada Council of the Arts threatened to cut our funding in large part, because our opera seasons were–at that time–deemed as too “popular” in presenting standard opera repertoire rather than taking risks with new opera and less-performed works. We were encouraged to increase our presentation of Canadian works and Canadian artists to receive public funds. We made adjustments and commitments to new programming and a policy of presentation of Canadian artists to re-coup those funding cuts.

So why is CBC, a publicly-funded radio station being allowed to pursue a course of populist programming, when a regional opera company could not? And indeed once the CBC management has managed to wreck a national treasure–one of the things Americans have envied us for–and deliver radio and television just like their commercial “competition” will politicians not turn around and say, “why are we funding this”? I sure would.

Does the rush to serve the youth market even make sense?

It may have escaped the marketing braintrust at CBC but the older demographic that they have traditionally appealed to is not disappearing, but rather growing, as the baby boom matures–and older citizens will always be with us. The CBC seems to be saying, “if we don’t attract young people, our audience members are all going to be dead in 10 years” but this is a very simplistic analysis. Every day people are getting older, so there are new people always entering the mature demographic that has a taste for thoughtful, challenging programming in news, opinion and the arts. And serious music has always appealed to a larger proportion of the older demographic than youth. This has been true for centuries.

The CBC move to axe Two New Hours was made quietly and swiftly before effective opposition could be mounted. Now that the changes at CBC Radio Two are in place, there is opportunity for the mature, sophisticated music community to speak out if their interests are no longer being served by their public broadcaster. We need to reclaim our public broadcaster. In the meantime, oddly enough, in the Toronto market, the classical music community is being best served by WNED FM from Buffalo, NY.

Radio culture used to flow the other way across the border.

Want to speak out?

Read another more informed and involved voice on the demise of Two New Hours.