(yours truly will be a presenter at the Ohio State University Conference, as detailed below, November 15, 2008) 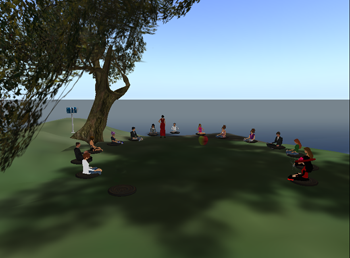 Saturday, November 15, 2008
To be held on Minerva, the teaching and research space in Second Life maintained by The Department of Women’s Studies, Ohio State University.
http://people.cohums.ohio-state.edu/collingwood7/minerva/conference.html

As teachers, librarians, artists, health care workers, and as volunteers in the many charitable and activist organizations of Second Life, women are a very visible element of our virtual community. The number of women’s groups and community centers is increasing, supported by an informal network of committed individuals. Those who come here out of curiosity often find themselves involved in these community activities, and those who came for professional reasons often find that their interests have widened and diversified as they have come into contact with Second Life society. Is what we do here just relaxation, a metaphor for what we do in real life, or do our Second Life activities have importance for our home communities and for society in general?

Virtual Concerts in the Park
Linda Rogers (Second Life: Kate Miranda)
Executive Director, Toronto Philharmonia
There was a time when orchestras wanted to reach out to new audiences, they would go out and play in public parks or shopping malls. These days people are increasingly gathering on the internet and in virtual reality to play and shop. As an arts administrator I have been curious about the possibilities of audience development within Second Life. Who are the musicians that are active in Second Life? Why are they performing there? And who makes up the audience?
Virtual Praxis: In the Director’s Chair
Phylis Johnson, Ph.D. (SL: Sonicity Fitzroy)Associate Professor & Interim Chair, Department of Radio-Television
Southern Illinois University
This paper looks at women involved in the creation, production, and distribution of news and entertainment content, and provides a wide scan of their contributions in-world. This content is created for and distributed to radio streams and news and entertainment cable services, and printed in magazines and newspapers in Second Life. The discussion specifically investigates the role of “media” women in SL content creation, and the potential impact on the larger media industry. SL users, internationally, are becoming notable media makers, and HBO featured the first documentary produced inside this digital community in early 2008. This paper attempts to create a portrait of an emerging woman producer who resides in this hall of media mirrors, and subsequently considers how much originality is realistically possible during construction in this parallel mediated universe.
The Women of Chilbo
Chris Collins (Second Life: Fleep Tuque)Instructional & Research Computing, University of Cincinnati
Chilbo is a community of artists, architects, educators, musicians, parents, hobbyists, students, and people from around the world who share a common vision that our interactions and experiences in virtual worlds can have a positive impact on our real world and our real lives. The Chilbo sim in Second Life is the cultural center of our community, but neither physical nor virtual location limits our ability to collaborate and share resources with one another.
A Village of our Own
Leta Hendricks, MA, MS (Second Life: Tamu Oh)
Librarian, The Ohio State University
“A Village of our Own” is a discussion of womanist resources available in Second Life. The Discussion will include a review of Second Life contacts, landmarks, and other womanist sources.
Gender and Race in Ultra-Conservative Groups in Second Life
Randolph Hollingsworth, Ph.D. (Second Life: Bella Yan)
Assistant Provost, University of Kentucky
My presentation will focus on the role of female avatars in racist right-wing groups in Second Life. Why would a right-wing group choose to use Second Life for communication and outreach – and especially in regards to women? Katherine Blee’s Inside Organized Racism (2002) states that women are heavily sought after by American hate groups, making up half of all new recruits. Second Life is ideal for imagining and practicing gender and race, and ultra-conservative groups have found land, groups and events in Second Life that match their needs. There is a clear connection between some white power, nationalist websites and groups in Second Life. Individuals identified in fascist discussion groups and MySpace profiles sometimes post their Second Life avatar names. Portraits of female avatars participating in right-wing groups in SL will be described. Attendees will be given a party favors bag with hyperlinks to important rightwing groups’ websites and SL landmarks to interesting sites. Attendees may wish to be teleported to one particular site to see and discuss the symbolic structures present. In this session, as Ingeborg Reichle wrote in her 2004 essay “Remaking Eden,” (Cyberfeminism. Next Protocols): “the observer is no longer merely an observer, but rather becomes a participant.” The presenter will facilitate a short discussion on the role of gender and race in rightwing groups in Second Life.
Performing Virtual Women’s Community
Lea Popielinski (Second Life: Lette Ponnier / Laertes Parx)
Ph.D. Candidate, Department of Women’s Studies
The Ohio State University
This paper will explore the ways in which the concept of “women” in Second Life shapes the building of women’s homosocial environments within SL through an examination of the concept in terms of gender performance. The facility of constructing an SL avatar that is, by conventional definitions of sex and gender, incongruent with one’s physical body, is enough to place such concepts as “women’s community” in tension. This paper will explore the meaning of the phrase “women’s community” through the concept of performativity as it is understood through the work of Judith Butler. I will argue that the physical sex of SL users is filtered through the SL medium to obligate avatars in presumptively all-female spaces to perform “women’s community.” The creation of “women’s communities” in SL is a practice in referentiality wherein tropes that take their meaning in users’ understanding of women’s community come to be recognized and reiterated in the virtual context, but with a latent awareness that gender performance takes precedence over physical sex in the creation of such spaces. One SL space I particularly wish to examine is the Joyous Harmonious Park, formerly known as the Baths of Sisterhood, a women-only relaxation park with a history that seems to involve several characteristics stereotypically associated w
ith the creation and dissolution of women’s spaces.
Panel discussion: Is Second Life a welcoming space for women?
As educators, business people, community activists, artists and musicians, women make a strong contribution to Second Life society. According to the last published metrics from Linden Lab, 40% of user hours in Second Life are spent by people who self-report as female. While their achievements are to be seen everywhere in our virtual world, the energy and creativity of women in our community may face obstacles. Although no formal studies have been published, there is anecdotal evidence of harassment and intimidation. This panel will be one of the first attempts to assess the problem, beginning with a discussion our own personal experiences.
Bread and Roses Life, L. Rogers