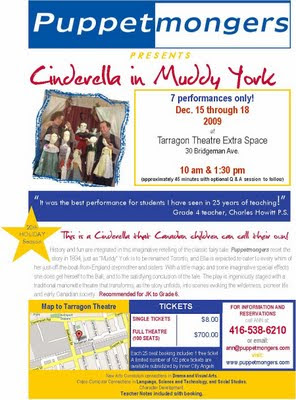 If you are in travelling distance of Toronto you won’t want to miss this great event!

History and fun are integrated in this imaginative retelling of the classic fairy tale. Puppetmongers reset the story in 1834, just as “Muddy” York is to be renamed Toronto, and Ella is expected to cater to every whim of her just-off-the-boat-from-England stepmother and sisters. With a little magic and some imaginative special effects she does get herself to the Ball, and to the satisfying conclusion of the tale. The play is ingeniously staged with a traditional marionette theatre that transforms, as the story unfolds, into scenes evoking the wilderness, pioneer life and early Canadian society.

This is a Cinderella that Canadian children can call their own! 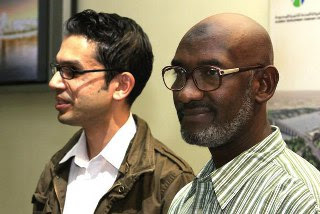 Delist and Desist!
Stop Canadian Involvement in Torture.
Abousfian Abdelrazik Speaks in Toronto
With an Introduction by Dr. Sherene Razack

Abousfian Abdelrazik is a Canadian citizen who was detained, interrogated, and tortured in Sudan with the complicity of our own government (see http://peoplescommission.org/en/abdelrazik/ for further background). Indeed, the Federal Court of Canada found earlier this
year that spy agency CSIS was complicit in his detention.

His six-year saga of trying to come home to his loved ones (including a year-plus stay in a small corner of the Canadian embassy in Khartoum) was blocked at every stage by a variety of levels of the Canadian government, including CSIS and the Department of Foreign Affairs.

Never charged, he was beaten, threatened and tortured during two periods of detention. Abdelrazik was interrogated by CSIS officials, and separately by Sudanese and French intelligence agents and the FBI. The Canadian embassy was instructed by the Canadian government that: “Mission staff should not accompany Abdelrazik to his interview with
the FBI.”

Released and cleared of all suspicion by Sudan in 2006, and then by the RCMP and CSIS in late 2007, his many attempts to return home to Montreal were repeatedly blocked.

The grass roots efforts of hundreds of people across Canada led to a historic court order that forced the Canadian government to allow Abdelrazik to come home. He was finally reunited with his family in June of this year. Yet his struggle continues.

His name remains on the United Nations 1267 list. This list imposes a travel ban and complete asset freeze on listed individuals. Canadian regulations implementing the 1267 list prohibit anyone from providing Abdelrazik with any material aid – including salary, loans of any
amount, food or clothing. This makes it impossible for him to live a normal life.

Abdelrazik was not told that he was being placed on the list, was not told why he was on the list, and was given no opportunity to defend himself. As Federal Court Judge Russel Zinn said in his ruling forcing the government to let Abdelrazik return, “There is nothing in the (1267) listing or de-listing procedure that recognizes the principles of natural justice or that provides for basic procedural fairness.”

No one has been held responsible for the grave injustices and terrible violence he has suffered.

As Abdelrazik undertakes the challenge of recovering a life of dignity for himself and his family, Mr. Abdelrazik is coming to Toronto as part of a national speaking tour so that he can meet his supporters and share his story in person. It is his hope to be “delisted” from the UN list, and to see true accountability at the federal government level.

Mr. Abdelrazik’s horrific experience is part of a broader Canadian pattern of involvement in torture, and his talk on October 8 kicks off a speakers series that will focus on other cases of Canadian complicity in the most brutal human rights abuses imaginable. Watch for future
speaking events featuring Abdullah Almalki (http://www.abdullahalmalki.com/), individuals subject to secret trial security certificates, a focus on Canadian involvement in the U.S.-based School of the Assassins, Benamar Benatta (http://benamarbenatta.com/), and more.

(Dr. Sherene Razack is a professor, Sociology and Equity Studies in Education, the Ontario Institute for Studies in Education of the University of Toronto. She is also the author of the remarkable Casting Out: The Eviction of Muslims From Western Law and Politics as well as
Dark Threats and White Knights: The Somalia Affair, Peacekeeping and the New Imperialism)

Organized by Stop Canadian Involvement in Torture and Christian Peacemaker Teams Canada, endorsed by the Centre for Integrated Anti-Racism Studies (CIARS) at OISE.

If you cannot make it to the Toronto event, Mr. Abdelrazik is speaking in many other parts of Canada. See his schedule at http://peoplescommission.org/en/abdelrazik/events.php