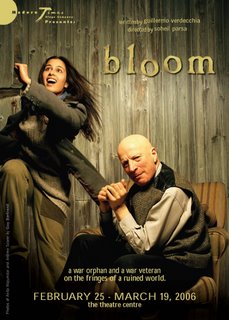 In the Theatre Centre, Queen and Dovercourt, Toronto until March 19, 2006

Thanks to the generosity of our colleagues at War Child Canada I was able to attend this play with a powerful socially relevant piece of theatre from a highly professional Canadian stage company.

In a series of crisp vignettes, playwright Guillermo Vedecchia presents us with a story that is the dramatic equivalent of a series of black and white jumbled snap shots that have fallen willy-nilly from a shoe box. The faces and expressions jump out at us in sharp relief but there are gaps in the story, the timeline is jumbled and occasionally the focus is a little off. Indeed the accidental discovery of a few old photos begins the play’s main conversation.

Presented by the Modern Times Stage Company, the play is set in some wartorn near future. It would appear that the planet, the crops and many of the people are sterile. Sterility, planting and birth, natural and unnatural become recurring images.

Alone, in a house in no man’s land at the edge of a still-waging war, an old nearly blind man and a mysterious boy talk, play, joke, and argue. As the old man’s sight fails, his inner sight sharpens to reveal ghosts of his past and we learn that he has seen the other side of war as a soldier. Andrew Scorer, as the old man, Gerontion, is compelling. At times his face reminds one of Munch’s “Scream”. When he proclaims that man is “an accident, a meat machine” he invokes the machine-like repetition of his own existence.

At various points in the play a strange character who is variously a waiter, a grave digger, seems to act as the voice of Fate or historical accident. At one point this character circulates intolling “Time, time, time”. Is he telling the audience that time is ticking by even in the present and they must act soon to avert this dark future? I think so yes. But he is also speaking to the action in the play, informing us that these vignettes are episodes in disjointed time viewed through the lens of individual memory, trauma and viewpoint.

As the strange story unfolds in brief, stark, snapshots flashing out of the blackout a strange redemptive journey through memory unfolds. The conclusion with a sudden rainstorm would have underscored depression in another play, but here it is a ray of hope that seeds might sprout again and life begin anew. The ending is ambiguous because we have grown to distrust fertility. We leave the theatre knowing that the life cycle has renewed but will it be life as we know it?

Amnesty communicates with style and wit