In the non-profit and arts sector we use the term “capacity-building” a lot but we seldom stop to compare notes about what we mean by the term.  To many non-profit staff and volunteers, it is all about the money and certainly more dollars builds our capacity. . . as long as those dollars are not wasted.  But there are other considerations in capacity building that can help us do more with what we have and position us to grow.

“What Dances in Between, the title given to Toronto-based photographer Cylla von Tiedemann’s exhibition of dance images at the Al Green Gallery through February 9, captures the essence of the quasi-retrospective as having no strict beginning or end: a creative journey that, like the dancers in her kinetically charged photographs, is caught in mid-flight.”

Michael Crabb reports today in the Toronto Star on “I’m Not the Indian you are thinking about” from Red Sky.

Since I first worked with Sandra and Carlos at Red Sky in 2003 on “Caribou Song” while serving as General Manager at Soundstreams Canada, I have admired their choice in projects and their voice in Canada in dispelling stereotypes about native people.

There is actually a lot of vested interests on both sides in keeping those stereotypes alive but until we move past them we really can’t have understanding nor begin to work together on the social justice problems that we’d all like to see addressed effectively.

In memory of the northern Red Oak is a simple, evocative and transformative piece of art, and that’s really typical of what Prash does in art. Here’s the film. Prash can be found at http://Prashart.blogspot.com

The first round of the Difference Engine Initiative, a six week gamemaking incubator for women, is nearly over and we will be presenting the games that they made at this Hand Eye Society Social for the community to play!

Most of the creators will be in attendance and Mare Sheppard, co-coordinator of the DEI, will be hosting the evening. In addition to the usual drinking and chatting, this Social also features a special guest from Chicago, Erin Robinson, who will be doing a presentation touching on her experiences as a game developer (including Puzzle Bots and the freeware Nanobots) as well as her role helping highschool girls make games.

The first and second rounds of the Difference Engine Initiative are part of the OMDC-funded TIFF Nexus.

Contact Contemporary Music members M
ary-Katherine Finch and Wallace Halladay curate a concert of music for saxophone and violoncello. From beauty to vulgarity, and from the sacred to the profane, these two virtuoso musicians present an intimate programme at Gallery 345.

One of the Soviet composer Edison Denisov’s last works highlights the lyrical qualities of the two instruments. As Denisov said, “Beauty is the principal factor in my work. This means not only beautiful sound…but beautiful ideas as understood by mathematicians.” The programme includes the works of Russian followers of Denisov: the religious transcendence of Vustin (with guest percussionist Ryan Scott), and the stoic expressionism of Karassikov (with CONTACT pianist Allison Wiebe).

The music of German Helmut Oehring is some of the most interesting to emerge from East Berlin – with late training in classical music, this electric guitarist explores sound and vulgarity in his musical description of Fred Leuchter – Holocaust denier and designer of instruments of capital punishment. Allison Wiebe will spend the intermission preparing the piano to join the duo again.

Vancouver-based composer Dorothy Chang’s Walk on Water provides the title for the concert, and fellow Canadian Robert Lemay was inspired to write this dynamic duo a work for this occasion.

Saxophonist Wallace Halladay captures the qualities of the modern virtuoso, being at home in numerous styles, from the traditional to jazz and beyond. A specialist in the performance of contemporary music, he has commissioned and premiered numerous works. A soloist with the Vancouver Symphony and Esprit Orchestras, he also inaugurated the Kitchener-Waterloo Symphony’s “Intersections” Series. He recently worked with Philippe Leroux on the North American premiere of his saxophone concerto in Montréal. He recorded the two saxophone Sequenzas of Berio and the Colgrass concerto for NAXOS and is in demand as a performer with new music groups across Canada and the US. Wallace holds a doctorate from the Eastman School of Music, and studied at the Conservatorium van Amsterdam with Arno Bornkamp. Wallace was the 2009 recipient of the prestigious Virginia Parker Prize from the Canada Council for the Arts, the first woodwind player to be awarded in its 25-year history. Wallace is a Conn-Selmer Artist and plays Selmer (Paris) saxophones.

Cellist Mary-Katherine Finch holds both Bachelor and Master degrees in performance from the University of Toronto. She performs frequently in recital with pianist Ron Greidanus. Playing an authentic baroque cello, she has appeared with Aradia, Baroque Music Beside the Grange, Grand River Baroque Festival and Toronto Masque Theatre. In the area of new music, she regularly collaborates with the ensembles Toca Loca and Ergo, and has premiered several chamber works of Canadian composers. Mary-Katherine frequently plays with the larger ensembles of the Mendelssohn, Isler, Amadeus and Elora Festival Choirs.

We welcome all established and emerging artists between the ages of 13 to Adult within Northwestern Ontario to participate!

The goal of this workshop is to build the skills and regional connections needed to make a film adaptation of A ROUGH TRANSLATION- an original theatre production IMPACT Theatre created that addresses boundaries within dating relationships, identity and hope . To accomplish our goals we have invited the Actors Training Centre of Manitoba to provide intensive training related to acting, writing and directing for film. Our thanks to the Ontario Arts Council for the funding that has made this professional level workshop possible!

Mark these dates on your calendar!

We we would be happy to provide billeting for out of town guests!

Just contact us to let us know what you need!

In this advanced level workshop participants will work with a professional film writer/editor to learn techniques to effectively tell a story through film. Using the story of A ROUGH TRANSLATION as a spring board for discussion participants will be introduced to different ways to address challenging subject matter and then given the opportunity to practice those techniques. With the coaching of a professional director and acting instructor participants will learn advanced acting techniques that bring a story to life ! Participants will have the chance to further their skills in the areas that interest them most including writing, storyboarding, acting, and directing. Through this workshop IMPACT Theatre hopes to connect with regional artists who might take part in the film adaptation of A ROUGH TRANSLATION, however all artists are welcome to attend.

* It is assumed that participants have some prior experience or training in acting, writing and/or film.

Artist Biographies:Jeff Skinner’s artistic career is very diverse and includes acting, writing, directing and producing in theatre, film and television. He has performed in over close to a hundred theatrical productions, films and television shows including The Big White with Robin Williams, Falcon Beach for Global and Scared Silent with Penelope Ann Miller. He is currently a partner in Two Lagoons Entertainment and enjoys sharing his skills and experience as an acting Instructor/Coach with the Actors Training Centre of Manitoba.

Nicholas Burns works as a freelance writer and artist creating storyboards using conventional and computer media. He has written many scripts for educational and mainstream comics, radio plays, short films, TV movies and feature films. He has storyboarded dozens of feature films, TV movies and music videos and has become well know in the industry as a “script doctor” with the ability to help writers and tell their stories. He has also written, produced and directed a mocumentary, Snoring, which was a winner at MocDocs and was broadcast nationally.

If you have any questions or want to learn more, contact:

Calling all artists who love the birds and bees!

The Pollinators Festival is coming to Evergreen Brick Works on Saturday June 25th, 2011. The Festival is in honor of International Pollinator Week and seeks to raise awareness and appreciation for the birds, bees, flies and butterflies that pollinate our fruits, veggies and flowers.

We want to integrate the arts into the festival and will do so by hosting a community art exhibit. We are looking for any pollinator-inspired artwork (poetry, paintings, photographs, etc) to share with the public. If you have any existing work of anything pollinator related, send it to us. If you don’t have anything yet, go outside and make something! Please email a jpeg of your work to Madeleine.lavin@gmail.com by June 15th, 2011. We will print a copy of your masterpiece and hang it up at Evergreen Brick Works during the Festival. With your permission, we will sell the work and donate all of the proceeds to Pollination Canada.

Help us spread the word and pass this on to your artist friends. The exhibit is open to all!

Here are the details about the festival (see attached flier for more): 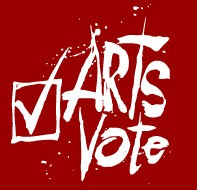 If you are a Toronto artist, work for an arts organization or you directly or indirectly have business ties with artists & cultural attractions in Toronto (marketers, web designers, printers, hotels & restaurants etc.) then you’ll want to assure that you know which candidates in the upcoming Toronto elections understand the importance of the arts to the quality of life in Toronto and to the tourist economy.
Sign up at Arts Vote today to keep in the picture.