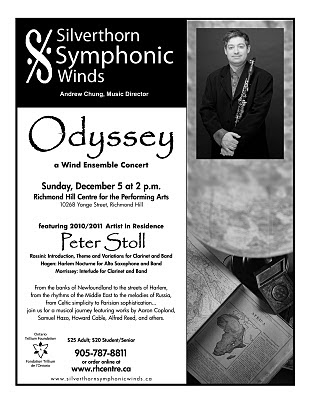 Silverthorn Symphonic Winds (SSW), under the direction of Andrew Chung, presents “Odyssey — a Wind Ensemble Concert” featuring 2010/2011 Artist in Residence Peter Stoll, who will perform as soloist on clarinet and saxophone. Join us for a musical journey from the banks of Newfoundland to the streets of Harlem, from the rhythms of the Middle East to the melodies of Russia, from Celtic simplicity to Parisian sophistication. Featured soloist Peter Stoll will perform Rossini’s “Introduction, Theme and Variations for Clarinet and Band,” Hagen’s “Harlem Nocturne” for saxophone and band, and Morrissey’s “Interlude for Clarinet and Band.” Compositions by Copland, Hazo, Cable, Reed, and Ellerby will complete the programme.

The SSW Artist in Residence Program, established this year, offers an opportunity for ensemble members and the general public to benefit from the expertise of an established, professional musician. The 2010/2011 Artist in Residence, Peter Stoll, will be the featured soloist and host at the two Richmond Hill Centre for the Performing Arts concerts, and will offer a free public masterclass (date to be announced) for adult and high school aged clarinetists. Throughout the season, he will attend six SSW rehearsals to provide coaching for woodwinds and to offer general feedback to the ensemble as a whole. In addition to enhancing the skills and musicality of ensemble members, Peter’s solo performances and engaging manner will be a delight for audiences.

Known for his virtuoso energy on stage, Peter Stoll was a prizewinner in the International Clarinet Society Competition, Solo Clarinetist with the World Orchestra of Jeunesses Musicales in Berlin and Vienna, and has been a guest clarinet soloist with orchestras in Canada, the U.S., and Russia. He has performed as a saxophone soloist with the Toronto Philharmonia, the Orillia Wind Ensemble, and with choirs in the Toronto and Ottawa area. A frequent performer of new music, Peter has traveled to Germany, New York City, Finland, and Lithuania with the ERGO ensemble. He is a core member of the Talisker Players, Principal Clarinetist of the Toronto Philharmonia, and a member of the Faculty of Music, University of Toronto. More information can be found on his website at: www.peterstoll.ca.

Founded in September 2006, Silverthorn Symphonic Winds brings classical and contemporary repertoire for wind ensemble to audiences in Toronto and York Region. The all-volunteer ensemble is characterized by exceptional dedication and a commitment to the highest possible level of performance. The musicians, who are all chosen by audition, range from highly accomplished amateurs to semi-professional musicians. Silverthorn Symphonic Winds is supported by a generous grant from The Ontario Trillium Foundation. For more information, visit: www.silverthornsymphonicwinds.ca.

Capitalism and Culture in the Junction, opening this Thursday, Feb. 3

"I'm Not the Indian you are thinking about" at Harbourfront

Note to Factory Theatre Board: Please reinstate Ken Gass and stop the foolishness