The Association of Professional Fundraisers is show below updating its professional code of ethics in 1964. More than 40 years later the Canadian Charitable sector is catching up! 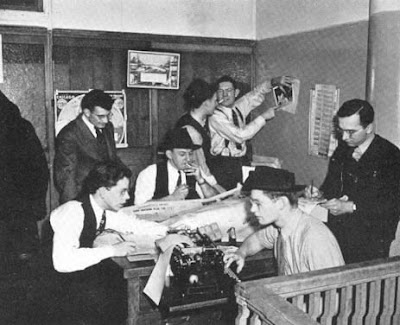 In the wake of exposes by the Toronto Star of fundraising practices by some charities that have resulted in as much as 90% of funds raised going to fundraising and administrative costs rather than charitable work, the charitable sector has announced the implementation of a self-policing code, reported in the October 22/07 Toronto Star story, “Charities Launch self-policing code” by Kevin Donovan. (note that link is time sensitive)

The public is worried about donating wisely and–on the other hand– those of us that work in the non-profit, charitable sector understand that the problem of getting the most bang for the charitable buck is deeper and more complex than the simple solutions suggested as first steps. We have some idea of where the bodies are buried.

The frustrating thing for those of us working in the sector is when we see a great program working very effectively in a sector fail to gain support, while a noisy charity that really does very little beyond generate hoopla and organize fundraising events, gets media attention, celebrity support and commands public dollars.

Through Imagine Canada, charities are being asked to sign a voluntary code. One of the first provisions of the new code is that signators will not use commission fundraisers as this practice can lead to both aggressive marketing and the use of charitable funds to simply pay fundraisers. The information that is missing in this recent announcement is that the Association of Fundraising Professionals has included this rule in their code of ethics originally adopted in 1964! Using commissioned fundraisers has been regarded as both sleazy and ineffective by non-profit managers for at least a decade. So it is shocking to hear large charities like Sick Kids and World Vision only swearing off the practice in 2007.

The next provision of the code mentioned in the October 22/07 article is that charities will adhere to a code of honesty in reporting to their donors. Imagine Canada is said to be cracking down on “wild claims of success by the charitable sector.” Good idea but very vaguely worded.

Nowhere in the report is there a clear criteria how “wild claims” will be detected nor how the sector will amend the practice. While some issues are more complex, there eally there are a number of ways that some charities deceive the public that could be identified, a test of accuracy applied and the practice cleared up fairly easily. One example is the use of self-aggrandizing and confusing titles for organizations and programs. Many organizations have “International”, “World” and “Canada” or “Canadian” in their titles. The public can be expected to presume that an organization with “International” or “World” in the title has directly-administered programs in a number of countries around the world. The sector should/could agree that having directly-administered programs in less than a set number of nations, (7, 5, … 3?) and using “International” or “World” in the charity’s name or program title, is deceptive. By the same token, charities that describe themselves as the X organization of Canada, lead the public to believe that they offer programs and services to Canadians in a number of provinces. Imagine Canada should include benchmarks for the use of these common attributions.

Another way that “wild claims” could be curtailed is by adopting a strictly enforced standard for reporting on statistics for programs. This is straightforward for programs that are solely and directly administered. It becomes more difficult in jointly-run programs. Sometimes charities give small donations to programs and then claim the entire program and its activities as part of the work of the charity. Real collaborations between agencies in the charitable sector is to be encouraged, but the public should be able to tell clearly who is responsible.

Here is an example of the way this numbers dodge can work in the charitable sector. Charity X raises money to run a cross-country literacy program that involves authors in doing readings in remote communities for the purpose of both literacy awareness and also to promote local literacy programs. Then charity X contacts grass-roots organizations and gets them to do all the work, undertake the lion’s share of the work and all the marketing expense in organizing the events. Perhaps a small “how to run your event” manual is written by Charity X from freely available material found on the internet, providing a token organizing effort. Another token support is given to the event in the form of subsidizing author airfare for example—transferring a small amount of funds raised to actual program costs. Meanwhile there is virtually no work or expense by charity X other than the transfer of that small portion of funds raised and yet Charity X takes credit for a national series of literacy awareness events, and furthermore enhance their reputation as a national organization while potentially running no real programs in Canada and keeping the lion’s share of money raised for their administrative and fundraising operations. A staff salary is paid to a “program coordinator” but that person’s daily work assignments relate to fundraising and general administration. A report to donors on the project includes the information that X people attended events in 15 locations across Canada and X dollars were expended on program costs, however the report on program costs includes the salary paid to someone for administration and a pro-rated portion of administrative costs such as photo-copies, office suppliers… even if none of these were used for program materials. About 80 % of funds raised is claimed as being used in “program costs” with a modest 20 % being accorded to administrative support of the program. However a hard forensic accounting look at the program might show that only 10% to 20% of the money donated to the program was transferred to direct program costs in the form of low hassle airfare subsidies to grassroots groups organizing their own events.

This is the complex face of garden-variety “wild claims” in the charitable sector. This type of practice is damaging to the climate of giving in Canada. It also hurts legitimate charitable organizations, and is poisoning the working climate in the non-profit sector– both within “bad apple” organizations and within the good organizations who struggle to compete with the “bad apples” who misreport activities, results and proportion of money spent on administration and fundraising.

While Imagine Canada is to be commended on this first step of a self-governing code of ethics, it is a very, very small step. Much more work is needed and it is not clear that this can be accomplished by the sector itself. In my next article I will attempt to write about what I see as a sickness in the heart of some charities and non-profits and some thoughts on how to tackle those difficulties.

Restoring trust in the charitable sector.

The Arts Consultant: planning for a useful consultancy

Getting it Right: Consulting Projects