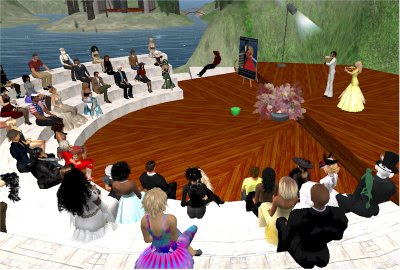 For two years I have been presenting concerts in the virtual world of Second Life developing my series of live concerts at Music Island into one of the virtual worlds’ hot spots and attracting attention of both online and traditional journalists.

Now, having recently stepped down from my position as Executive Director of the Toronto Philharmonia, I would like to find ways to make my avocation part of my vocation. I am actively looking for (preferably Canadian) ensemble(s) or presenters that would be interested in partnering with me for a series of concerts/audience development activities in virtual reality.

I would see this collaboration as involving me in developing a budget and proposal and seeking funding for an artistic project we would jointly develop. I am an experienced proposal and grantwriter. I would also be able to supply the inworld expertise in streaming, coordinating the event and promotion.

One model that has occured to me would be a series of concerts in a Toronto venue that would be streamed into Second Life with streaming video from both worlds. The Toronto live audience would see the virtual performance/audience on big screen and the international virtual audience would see the Toronto audience on an inworld media viewer. There are other ideas that might fit. I see this as being of interest to local ensembles & presenters, individual musicians and also with some appeal to a venue or destination wishing to promote itself to international tourism.

You can contact me via a comment left here, or inside of Second Life by IM’ing Kate Miranda.

The purpose of the Arts

So your arts org is ready to hire a marketing company